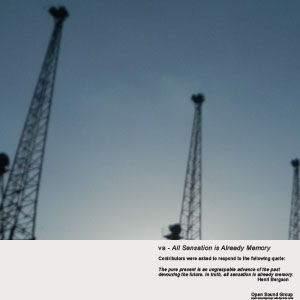 A compilation of sound art, drone, improvisation, noise, spoken word, sound poetry and other sonic experiments. Contributors were asked to respond to the following quote from Henri Bergson: "The pure present is an ungraspable advance of the past devouring the future. In truth, all sensation is already memory."
The release is compiled either to play as a continuous album, or in three separate LP length sections; tracks are numbered accordingly.

Uploaded by grahamdunning on March 8, 2012